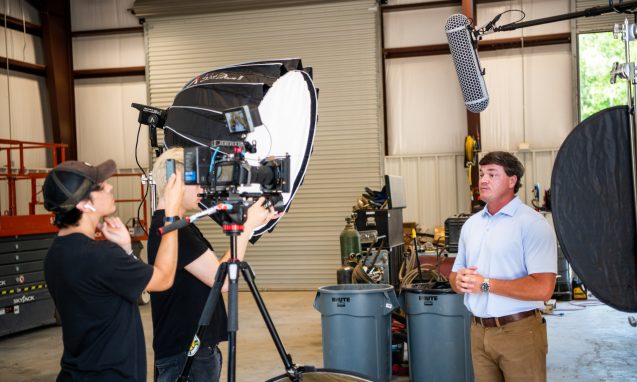 There are a few different types of drone footage. Broadly speaking, there are three categories: industrial/scientific, FPV (first person view — this tends to be the type of drone video that goes viral) and cinematic drone footage. The last type, cinematic, is most of what we do here at Infomedia. It’s designed to cut in well with footage that’s captured on the ground.

Cinematic footage is meant to enhance and elevate the footage that we capture on the ground. It’s hard to find a project where drone footage is not appropriate for at least one or two shots. For Infomedia projects, drone footage is often used for the 10-15 second video loop on website homepages, but we also do longer form videos that include StoryBrand or product features. With drone footage, we usually start with one or two clips that set a sense of place and end with a shot slowly pulling away, then fading to black or white with a logo.

When it comes to drone photography, it’s very important to ensure that your drone pilot is properly licensed. Drone photography requires a license, and if an accident happens and a pilot isn’t licensed, you’ll likely miss out on that footage — and the pilot will be fined for flying a drone while unlicensed.