The Ten Awards are given by AAF Birmingham "for those who make it all possible." The awards are designed to recognize unsung heroes in the advertising business. 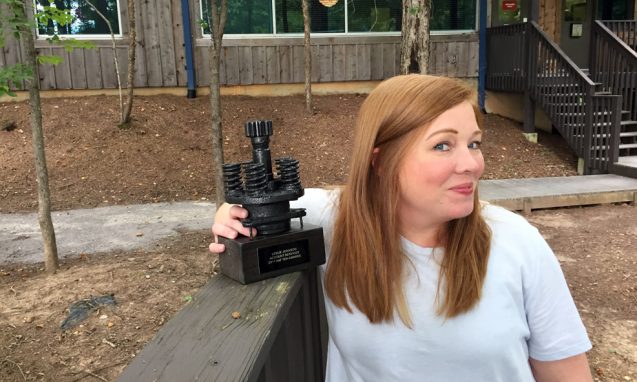 When we at Infomedia heard about The Ten Awards for 2017, we knew just who to nominate — Project Manager Leslie Johnson. The awards are meant to give recognition to people in creative fields who work behind the scenes, not often getting public accolades or glory. There are lots of awards given to designers and photographers and writers, but where are the awards for the people who help those “creatives” do their jobs? Well, The Ten Awards are designed to do just that. And at last Thursday’s awards ceremony — Leslie won!

She now holds the trophy for the Account Services Award. Here’s what AAF says the award is all about: “For those who know how to make it happen … account service is the art of making projects run smoothly and the magic of making it all invisible.” Well, as we here at Infomedia know, that’s totally Leslie. She works hard every day to keep designers, developers and copywriters wrangled, keeping us on-schedule and getting us what we need to do our best work. As if keeping a bunch of Infomedians wrangled wasn’t a big enough job, Leslie communicates with clients on every step of their projects, making sure they’re in-the-loop with exactly what’s going on and why, answering questions and helping them get the very most out of their web development experience at Infomedia. She also acts as a liaison with management, and she steps in to enter content and tweak projects when they need it. Oh, and she makes a mean Bloody Mary at office parties.

Leslie never acts overwhelmed or unwilling to push forward with a project; she’s willing to do whatever it takes to get a project launched on-time and perfectly for her clients, and she’s always the first to stand up for her team and protect our time. Leslie’s impressive enough that, in addition to Infomedia nominations, she even had nominations from other companies — former coworkers from her work at Southern Living and Willow House, where she worked before she joined Infomedia five years ago.

Leslie wasn’t able to make it to the awards ceremony itself because she was on a family vacation to Mexico (lucky!), so fellow Infomedian Pam Sanderson accepted the award on her behalf. And maybe that’s appropriate, because Leslie likes working behind the scenes best anyway (and public speaking isn’t her favorite). And Pam was honored as well: She’s now on the Board of Directors for AAF as Director of Public Affairs.

We’re so thankful for this opportunity to honor Leslie who works hard to make our jobs run more smoothly every day. Want to learn more about our intrepid Project Manager? Check out a few snapshots and favorite things in Leslie’s bio.