Sir Nicholas Saban knows what he's doing as a coach. He's had top recruiting classes for years, his team nearly always takes the SEC Championship (or plays in it at the very least), his team is disciplined, his players work hard at every practice and play hard in every game, and his tactics seem to be perfected — and we think you can take a few plays out of Saban's playbook and come up with some great new techniques for your website. 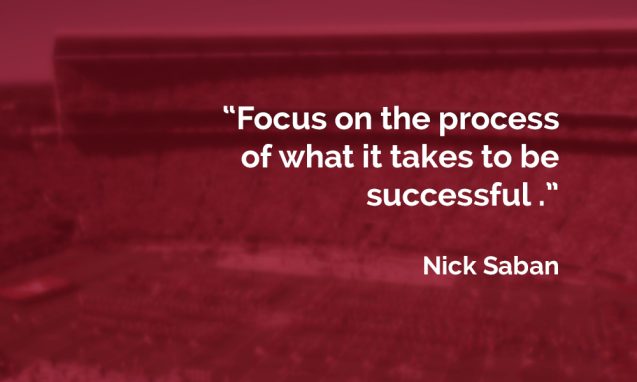 There are few things that get folks in Alabama more heated than some good deep south Football (yes, I meant to capitalize that. It’s important.) And since it’s so important, we at Infomedia want to give it the attention it deserves — and since I’m on the blog committee, I got nominated to write the Alabama Football post. Me, an Auburn graduate and fan, am writing the Alabama post. But don’t stop reading! I’ve got this! I assure you that I’ve completed ample amounts of research in order to honor my Bama fans (including my husband!) and that Saban guy in an appropriate manner.

Nick Saban knows what he’s doing as a coach. He’s had top recruiting classes for years, his team nearly always takes the SEC Championship (or plays in it at the very least), his team is disciplined, his players work hard at every practice and play hard in every game, and his tactics seem to be perfected — and we think you can take a few plays out of Saban’s playbook and come up with some great new techniques for your website.

Saban is known for what he calls “the process,” and it’s evident that his players understand and keep this top-of-mind in their playing. His theory is that each play lasts an average of 7 seconds, and the goal is to win just those 7 seconds. If you win play after play, then eventually you’ve won the game.

As you know, websites have many moving parts — much like a football game — so it’s important to be cognizant  of the “plays” and focus on winning just those. Let’s unpack this for a second (or 7): Your site has a logo, a design, copy, images, calls to actions, forms, and a main navigation menu. While the entire site matters as a whole far more than one single piece, each single piece still has the potential to be a total game changer. It’s the same as winning the game matters for the season more than a single play does, but big plays make up the games that ultimately make up the season.

The point here is, when working on your site, focus on the process: the proverbial 7 seconds. Perfect your logo. Perfect your copy so that it’s compelling and it directs your reader to where you want them to look and go on your site. Refine your calls to action so that your visitors are actually taking action. Tweak your design so that it’s appealing to the eye and fits the character of your industry. And simplify your forms so that they aren’t a burden to fill out.

It’s easy to get caught up in analytics and site traffic … the score, if you will. But your website traffic will never go from zero to thousands in one leap, one day, and frankly probably not even one month. The same way that Saban doesn’t expect to win games with one play, you’ll probably be disappointed if you expect traffic to grow in leaps and bounds overnight. It takes time, precision, determination, and all-out playing with your head down and nose to the grind stone. No matter what the score is, those Bama players play like points on the board are what their lives depend on.

Ok, we don’t want your lives to depend on your website necessarily, but time, precision, determination, and putting your nose to the grind stone will absolutely score you points and drive traffic to your website. Social media is a huge contributor here. It’s important to point out that social media is not a magic bullet (there’s no such thing), but each post, each link, and each image you post is potentially a scoring play for you. We don’t mean use cheesy “click bait,” but do share interesting articles, pictures people want to see, and posts your audience can connect with will attract traffic to your site like bees to honey. (Oh, uh … bees don’t play football. Oops. I ran out of football references.)

Before you know it, you will be able to look at your Analytics for the “season” and likely see an upward incline. Who would have thought Facebook of all things could give you a winning season? Not me. (Well, I didn’t used to, anyway. Now I obviously think it can because, you know, I wrote it.)

Prepare like Saban: Plan on and off the Field

A common misconception about websites is that they get better and maintain themselves on their own, but in reality they take updating and refreshing and planning. Saban plans out seminars for his players to attend off the field about life and living well. He makes sure they are keeping up with academics by providing tutors if they need them and ensures they are getting proper nutrition to stay healthy by making nutritionists accessible. He plans for the future by planning lessons for them about life after football and staying mentally healthy on and off the field. He makes football a lifestyle, not just a game.

Your website needs to stay healthy, too. It needs fresh content like a player needs protein and veggies. It needs to stay “smart” with design trends and persuasive content, and it needs to plan for the coming years with the ever-changing world of technology. The point is to keep your website top of mind, and understand that it needs to always be changing and adapting. Remember a player can’t be a couch potato and expect to have record-breaking performances on the field like so many Alabama players often do.

Despite my Auburn University degree and fandom allegiances, it seems as if Nick Saban has taught us a thing or two after all … how to keep your website in tip-top, high performance shape! Focus on the pieces of the whole, let the score be the reward not the worth of your site, and take good care of your site day in and day out.

What is a site map?