Every once in awhile, we take a break from blogging about web design and WordPress, and we tell you what’s trending over here at Camp Infomedia. We’ve shared some our favorite treats with you before, but this month — like the rest of the world — we’re all about the Pumpkin Spice. 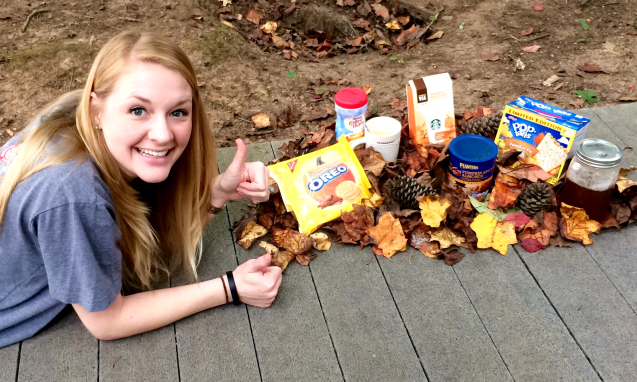 Every once in awhile, we take a break from blogging about web design and WordPress, and we tell you what’s trending over here at Camp Infomedia. We’ve shared some our favorite treats with you before, but this month — like the rest of the world — we’re all about the Pumpkin Spice.

The legend of Pumpkin Spice, of course, starts with the Starbucks Pumpkin Spice Latte, but it now has a myriad of spin-offs. We found Pumpkin Spice Oreos, Pumpkin Pie Pop-Tarts, pumpkin tea — there was even a rumor about Pumpkin Spice Pringles! (We looked, but these mythical chips were not to be found.) Like any worthwhile food trend, Pumpkin Spice has inspired some good additions to the snackosphere … and it’s also spawned some questionable experiments that deserve to be tossed back into the pumpkin patch. Here’s what we thought about the Pumpkin Spice class of 2015:

General Consensus: Perhaps unsurprisingly, Coffee-mate Pumpkin Spice Creamer added to coffee won the day in our very scientific category of “Pumpkin Spice Latte-ishness.” The creamer was a big winner all around, actually, with results ranging from “Mmmmm” to “Tasted a lot like Pumpkin Spice.” The only dissenter? Jonathan, our well-known coffee-hater, gave the creamer a bad rating, complaining, “I taste coffee.”

General Consensus: We liked them a lot! But nobody thought they tasted all that much like pumpkin. “I taste more vanilla than pumpkin,” said one tester. The worst Pumpkin Spice Oreo review: “Tastes like an Oreo that is orange. Never again.”

General Consensus: Pumpkin Moonshine Tea might not have real moonshine in it (it doesn’t — “pumpkin moonshine” is another name for “jack-o’-lantern”), but that didn’t stop us from getting a little giddy over how much we like it. Reviews included, “Smell is great,” “Really like it,” “Tastes great,” and “Tastes like October.” It’s no wonder Leslie and I have huge jars of this tea on our desks almost every single day.

General Consensus: We did not go nuts over these pumpkin-y nuts. Oddly, several reviewers cited “dry tongue” as a reason not to reach for this snack again, and another mentioned a “weird aftertaste.” Stuckey declared all almonds, including these, to be “bland.” One reviewer did love them, though, naming them the favorite of the day.

General Consensus: Very good! Joy declared this her favorite Pop-Tart of all time (well, other than the discontinued unfrosted Cherry Pop-Tart, may it rest in peace), and one reviewer said it was the Pumpkin Spice-iest of the bunch. Not everyone thought the Pumpkin Pie Pop-Tart was so hot, though — bad reviews ranged from, “Not my favorite” to “Meh. It’s a Pop-Tart.”