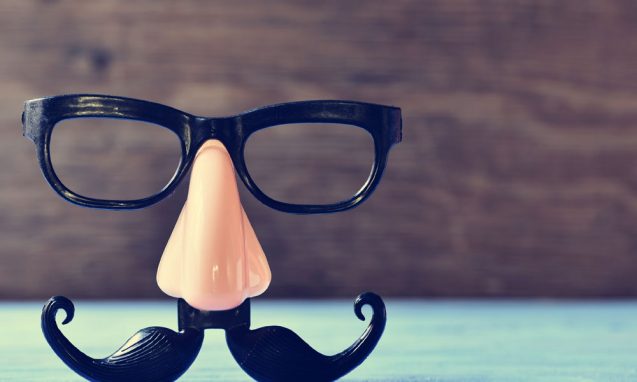 It’s nearly Halloween, and here at Infomedia, that’s a big deal. We have a costume contest involving team rivalries, a coveted trophy for the grand prize winner, and lots of creative people who really get into competing for the creepiest, craziest or most creative costume.

It’s fun to go through the workday in character — but it’s also fun to psychoanalyze other peoples’ costumes. Why do they choose the costumes they do? Does a person’s costume say something about their subconscious? Does it reveal some secrets that our normal office uniforms hide? We thought we’d take a look at a few of last year’s Infomedia office costumes to see if they reveal the beast within.

Your Costume Is: Lumberjack

Does this description fit UI Developer Stuckey? In spades! Stuckey’s always ready to save the day, whether it’s in our Support Department, where he routinely has to put out metaphorical fires, or in his off-duty life as an Eagle Scout and leader in his church’s youth department.

Your Costume Is: Hermione Granger 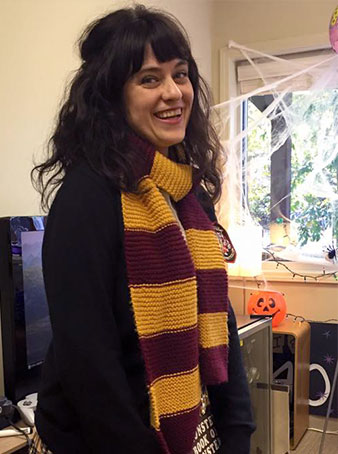 Does the characterization fit? Absolutely. Carrie’s our Communications Director, and she’s definitely a book nerd — she writes and copyedits for us and our clients, and she even owned a bookstore before she came to work with us! Plus, she understands the ins and outs of social media, and if that’s not magical, we don’t know what is.

Your Costume Is: Viking Warrior 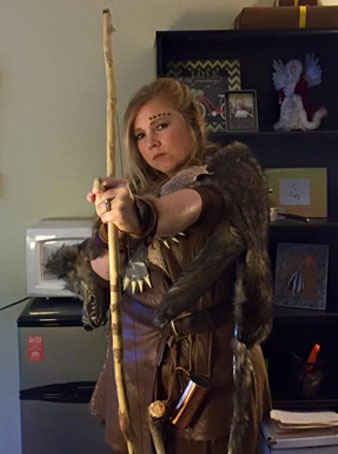 What It Says: You’re a fierce warrior and an adventurer.
Infomedia’s Character Representative: Leslie

If you’ve ever worked with our project manager Leslie, you know she’s a quiet warrior, fighting to be sure every client’s needs are met and that our projects run on time and stay in scope — that takes some serious warrior skills. Plus, Leslie loves to travel, whether it’s to Germany to see the Christmas markets or to Montana to spread her wings in the Wild West.

Your Costume Is: Sugar Skull 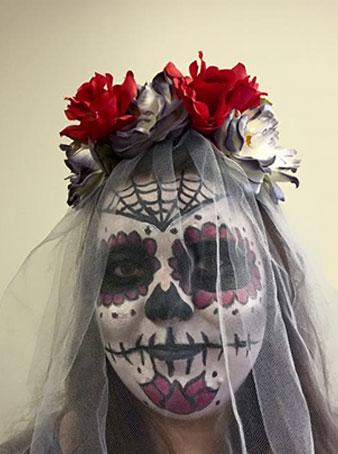 What It Says: Celebrating the Mexican tradition of Day of the Dead that’s all about honoring people, dressing as a sugar skull means you care about people and tradition, and you never forget a kindness.
Infomedia’s Character Representative: Pam

If you know Pam, you know she really cares about people, whether it’s her clients or our staff. Pam’s a stern taskmaster when she has to be, but she’s also quick to plan an office party, buy lunch or breakfast for her team or express her thanks for a job well done. She’s also dedicated to family and always eager to spend time with her husband, nephews and extended family when she gets the chance.

Your Costume Is: Willy Wonka 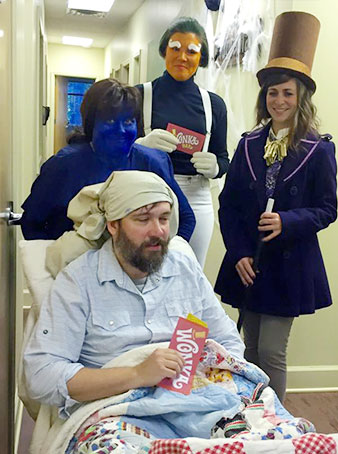 What It Says: You’re sweet with a dark side. You like to think differently, and you’re a little bit wacky.
Infomedia’s Character Representative: It’s a group costume featuring Joy as Willy Wonka, Amber as Violet Beauregard, Mary Katherine as an Oompa Loompa and (in a favorite among staff and judges alike) Brad as Grandpa Joe — and Brad’s son as Charlie.

This costume could not have been more accurate. Everyone here is a member of our design team (well, plus Brad, who’s a developer), and they’re definitely quirky and creative. Joy is our senior designer and brand chief, and she’s loves to work alone for most of her process and then wow us with the results, just like Wonka himself. Mary Katherine was a design intern at the time (we’ve since brought her on fulltime), and she worked behind the scenes like an Oompa Loompa to make the magic happen. And just like Grandpa Joe, Brad likes to sit back and wax eloquent (and, uh sometimes grumpily) from the comfort of this office. The similarities end with Amber, who unlike Violet is not annoying or selfish, but sometimes you don’t choose a costume based on your personality … sometimes, you just want to be blue.

This year for Halloween, we want to make you a part of our celebration! We’re opening our office voting to our clients and fans on our social media channels, so be sure to follow us on Facebook, Twitter and Instagram on Halloween if you want to get in on the voting — and feel free to do a little armchair psychoanalyzing as well!

How do I take notes during an interview?