The Infomedia Christmas party was a bit bigger this year; we joined together with our sister companies, Uptick (digital marketing) and CrowneWorks (video and photography). And although we usually go offsite for our holiday party, this was the year we all moved in together to a new office across the street from Pepper Place, so we decided to have our party at the office so our families could see our new space. 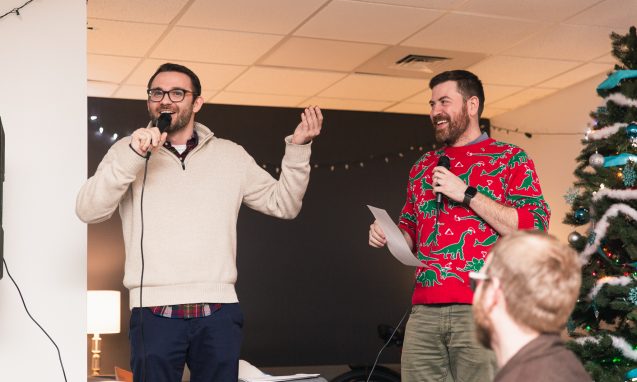 Because we held the party at the office, we decided to make the theme “The Office” — as in The Office TV show starring Steve Carrell that’s now on Netflix. If you’ve watched The Office, you know that it’s a comedy that takes place in the offices of a paper company from Scranton, Pennsylvania, and that it showcases the monotony, humor, drama, awkwardness and ridiculousness that can sometimes be present in office life. And if you haven’t watched The Office, you probably know at least a little of that, just from seeing promos and hearing from friends and family who watch it.

Here in our offices, we have a lot of Office fans — you might even say some are superfans. Our Customer Support Lead, Josh, has an Office quote for every circumstance. David Smith, one of our developers, and his wife Madison, who works at Uptick as a copywriter, have been known to stomp the competition at Office trivia events. And many of the rest of us are right there with quotes, references and repeated viewings of every single episode.

As you can see, our “The Office-themed Office Christmas Party” went off without a hitch — or, actually, there were several hitches, but part of the beauty of throwing an Office-themed party is that things aren’t supposed to go smoothly because that wouldn’t fit with the theme. Want to throw your own The Office-themed Office Christmas Party? It’s pretty easy to throw together. We suspended a few staplers in Jello, printed an “It is Christmas” sign, and hung up a banner so people could vote on which coworkers matched up to Office characters. We all enjoyed the presentation of our own Dundie Awards — it was so fun to celebrate each other and reminisce about inside jokes.There were a few more surprises for die-hard fans, too (check out the gifts under the tree and look closely at the bowl of Kit Kat bars). But the real event of the night? A surprise visit from Belsnickel, who appeared at the end of the party and let us know who was admirable … and who was impish.