Here at Infomedia, we work for an Internet company — so we're always being demoted from "family member" to "tech support" at holiday gatherings. We've had enough! So this year, we've come up some ways to avoid fixing the family computers and iPhones over Christmas. 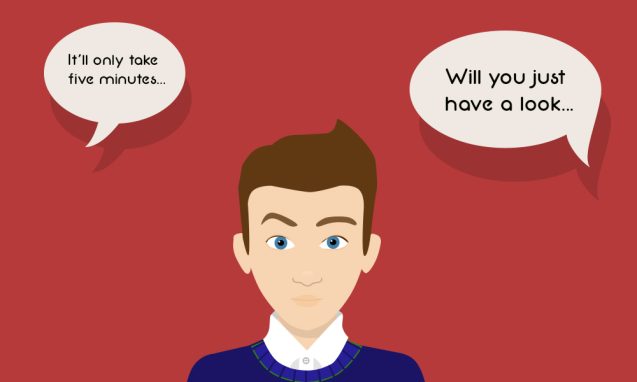 Here at Infomedia, we work for an Internet company, and that means we have a few things in common: We’re pretty excited about Star Wars. We have passionate Mac vs. PC allegiances that run deep. We have very strong opinions about how to pronounce “GIF.” And whenever we go home for the holidays, we’re the first ones to get roped into fixing the computers and tablets and phones of our family members who don’t quite get technology — and who think we’re experts at it.

Being demoted from “family member” to “tech support” isn’t anyone’s favorite way to spend a holiday, and we’ve all just faced the issue over Thanksgiving — so we’ve brainstormed some ideas for avoiding it over Christmas. Are a few of them a little bit … extreme? Well, yeah. But just think about whether you’d rather be catching a long winter’s nap or explaining DropBox for the bajillionth time, and suddenly a bout of fake food poisoning doesn’t seem like such a bad idea, right?

You know the old adage, “Don’t talk about politics or religion at the dinner table”? These topics are off-limits because they can be incredibly polarizing. When it comes to God and country, people get offended and emotional really quickly, and polite conversation quickly devolves into a shouting match. Use this to your advantage! Watch a little Fox News and little Bill Maher to do your opposition research in the next few weeks. Or just play your “Trump” card and do as Donald does — say the most politically extreme thing you can think of, then sit back and watch the fallout.

2. Say You Smell Something Burning

Convincing your relatives that dinner’s in jeopardy may just get them off the subject of asking you to transfer the files from your great aunt’s circa-1999 digital camera. It doesn’t matter if you really smell something burning; just make it up (bonus points if it’s a favorite family dish). Or actually set something on fire … but, you know, we can’t officially recommend that.

3. Malfunctioning iPhone? Put It In a Bowl of Rice

Sure, I know this solution only works if the phone’s problem is that it got a little wet. I know that. You know that. But does Uncle Harold know that?

4. Casually Knock over the Christmas Tree

The crash will look fantastic, and the uproar will definitely distract people from taking advantage of your tech skills. Besides, if you manage to make it funny enough (and especially if you involve the family cat somehow), your Christmas Tree Crash video just might go viral and become a YouTube sensation of its own.

5. Tell Your Grandma that You’re Planning on Staying Single … Forever

Okay, this only works if you’re actually single. But if you are, I assure you that you’ll get a lot of mileage out of this one. There’s no topic my extended family loves more than discussing why I’m not married yet. Subtopics include: “What are you doing wrong?” “Don’t you care if we have grandchildren?” and my favorite, “Do you want to be an old maid forever?!” You know those personal topics that you avoid at all costs? Now’s the time to break them out and use them to turn the tide of the conversation away from Aunt Florence’s non-functional iPad.

6. Call the Geek Squad and Introduce Whoever Shows up as Your Fiancé

This is kind of a corollary to #5, I guess. You get to kill two birds with one stone here — you’re outsourcing the tech support to someone who’s actually getting paid for it, and you’re dodging the “old maid” card. Plus, if you happen to be starring in one of those kooky Hallmark Christmas movies that seem to be all over Netflix lately, your hilarious “fake fiancé” stunt will surely result in quirky holiday hijinks and, ultimately, true love. If you’re unlucky enough to be a real person, it’s a little trickier and has a strong risk of backfiring. But if your only other option is teaching newly single Aunt Rita how to use Tinder, it might still be the way to go.

7. Fake a Ghostly Vision of an Ancient Relative

Who needs a functional Skype connection when you have communication from the great beyond! Christmas night has all the makings of a haunted evening: There are candles and twinkly lights all over the place, we’re already prone to thinking of the past, and everyone’s so full of ham and pie and wine that they’re prone to hallucination. All you need is a little slight-of-hand with a lacy tablecloth and you’re set to conjure the Ghost of Christmas Don’t-Ask-Me-About-Your-iPhone.

To be honest, I love spending time with my family over the holidays. And they don’t bug me too much about technology questions, either (I’m much more likely to get Instagram questions, haha). But when I head home this Christmas, I’m taking a stack of presents and a box of gingerbread … and I’ll have this list in my back pocket, just in case.

Why do stock photos look fake?