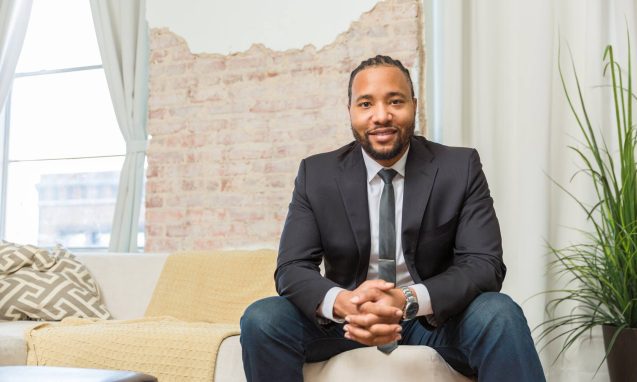 Have you met REV Birmingham’s director of business growth Deon Gordon? His enthusiasm for Birmingham is infectious. He also has the ability to spark thought-provoking conversations that somehow bring Outkast’s Andre 3000 and Auburn football into the mix. We sat down over Ono Poke Crunch bowls to discuss what’s on his plate at the moment (and as he prepares to become TechBirmingham’s next president on December 1).

“The stars are aligning,” Gordon says. “It is clear a lot of things are happening in silos. But there’s an opportunity to dial in and make a collective impact here.”

An area native, Gordon made a conscious decision to stay in the Magic City. In his free time, he enjoys exploring the city’s lesser-known parts.

“You grow up in a place and know it in a certain way, but it’s fun to discover what you never knew existed. Like Pratt — you imagine those places’ potential.”

“Birmingham is of historical significance, not just in the south but internationally, as the epicenter of civil and human rights. Other countries look to Birmingham for inspiration,” Gordon says.

“We often tell the city’s story through the lens of victimization,” he continues. “We still have work to do but what happened here made America look at itself. That legacy compels me.”

Beyond that, he points to Birmingham’s thriving art and culinary scene and vibrant entrepreneurial ecosystem.

“All the amenities of a world-class city are here and ready to be tapped,” he says.

That’s where The Big Pitch comes in.

“Nobody goes to New Orleans for Applebee’s. They go for the start-ups, mom and pop shops and the holes in the wall,” Gordon notes. “One of the reasons we have The Big Pitch is it is one of the best ways a city can tell its story. Small businesses do that. But they are also the hardest to fund.”

The Big Pitch gives entrepreneurs the chance to quickly build out their ideas’ core features and gauge public response, in the least expensive manner. The “Shark Tank-style” competition has a $40,000 prize at stake.

“We recognize their importance and their need to get funding, and we help plug the gap in ways that are valuable by providing the expertise of lawyers, marketers, and others. Even if participants don’t win, they leave with information, connections and a larger network,” he says.

“PNC has partnered with The Big Pitch from jump and it’s necessary to have that kind of corporate support,” he adds. If companies attract top talent, that talent wants to know where they will eat or play after five. It all works together, he says, creating and sustaining an economic development pipeline which helps Birmingham attract larger companies and brighter talent and leads to a better city overall.

“We’re not responsible for the individual success participants have,” Gordon says. “We’re responsible for supporting them every step of the way. We shine a spotlight on them so they have a better shot at amplifying their talents into something transformative for their community and themselves.”

Gordon’s background is in technology (Fun fact: He’s an Infomedia alum.). He admits he knows “just enough coding to be dangerous,” and says he was part of some online ventures that had modest success in college.  That experience gave him a deep understanding of what it takes for entrepreneurs to progress  from “concept to concrete.” Gordon believes his background and his time at REV Birmingham have prepared him to lead TechBirmingham.

Addressing racial and gender disparities in the tech industry will be part of that.

“It starts with exposure,” he says. “We’re selling women short. We have to change the expectation that tech is a boys’ club.”

Getting kids involved is also key, as is increased collaboration and advocacy from community partners and businesses.

“We have to ensure our urban and rural school districts have access. That helps break down the inequality,” Gordon says. “We want to articulate a vision of the transformative power of tech through age-appropriate content to kids.”

He admits that this is a long-range strategy.

“But at the end, you have empowered individuals who are gainfully employed and have the tools to become entrepreneurs who create their own opportunities.”

The Big Pitch Presented by PNC is Saturday, November 18 at the Negro Southern League Museum. Get your tickets by clicking this link.