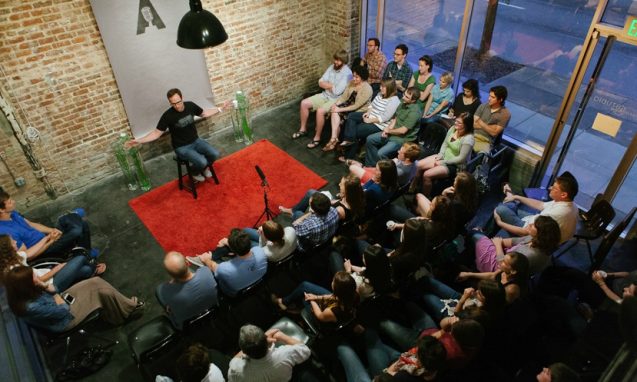 This is the third in our series from guest blogger Marty Swant who is joining us for a series on creative collaborations in Birmingham. Marty is a writer, musician, and the very definition of a “Man about Town” — he’s so likely to be spotted at the best shows and new events in Birmingham that there’s even a hashtag, #wheresmartyswant, dedicated to spotting him. Today Marty writes about ArcLight, a Birmingham storytelling event.

Storytelling is an essential fabric of southernness. And yet, while the tradition of storytelling has always existed in the South, its format has expanded and evolved.

ArcLight is a live storytelling event in Birmingham where everyday people tell true stories to a real audience. Its founders, filmmaker Taylor Robinson and producer Travis Hawkins, decided to create a venue for the stories of the city to be told. The event is held each month at Urban Standard in downtown Birmingham.

“I believe 100 percent that stories are the most powerful tool that anyone can use to communicate anything,” Robinson, owner of Six Foot Five Productions, says. “As a culture, as a town, as a city, our identity of who we are as individuals and who we are in a community as a whole is wrapped up in the stories we have.”

The monthly event, inspired by The Moth radio hour and reading series in New York (which airs on NPR), revolves loosely around a theme, bringing storytellers from across Birmingham to share an event from their life with a room of strangers. Storytellers pair up with an experienced coach who works with each bard to craft the story. Sometimes these stories are sad, bizarre, insightful or purely entertaining.

ArcLight has been growing in size and in scope since beginning in October 2010. While October’s event was last week, Robinson said more will be scheduled, with more ambition plans under development to partner with various organizations around the city to help the city’s generations connect through its history and its future.

The name ArcLight was derived from a type of lightbulb called an arc light. The bulb is known for its expedient transference of heat to produce light. Nothing is special about one end of the bulb or the other, but what happens in between is what makes it work. The same is with storytelling, he said.

Robinson hopes the event series will illuminate “the special thing … that happens between the storyteller and the audience.”

What is a CAPTCHA?